February 1st of this year marked the beginning of Janet Yellen’s term as the Chairman of the Federal Reserve as she took over for Ben Bernanke. The Federal Reserve System or “The Fed” was created by Congress in 1913 to provide the United States with a stable monetary and financial system. The Fed is charged with keeping inflation in check and to promote policies that will create jobs. They influence many aspects of the economy and in recent years, the Chairman of the Fed has become arguably the most important position in the global economy.

Since 2008, The Fed has engaged in “easy monetary policies”, which simply means the Fed provides stimulus to the economy by 1) purchasing long-term assets, mostly bonds and 2) lowering interest rates. As the Fed buys bonds, they increase the supply of money to spur economic growth. This is otherwise known as “Quantitative Easing” or “QE”. The Fed’s balance sheet has dramatically increased over the past 5 years (figure 1). 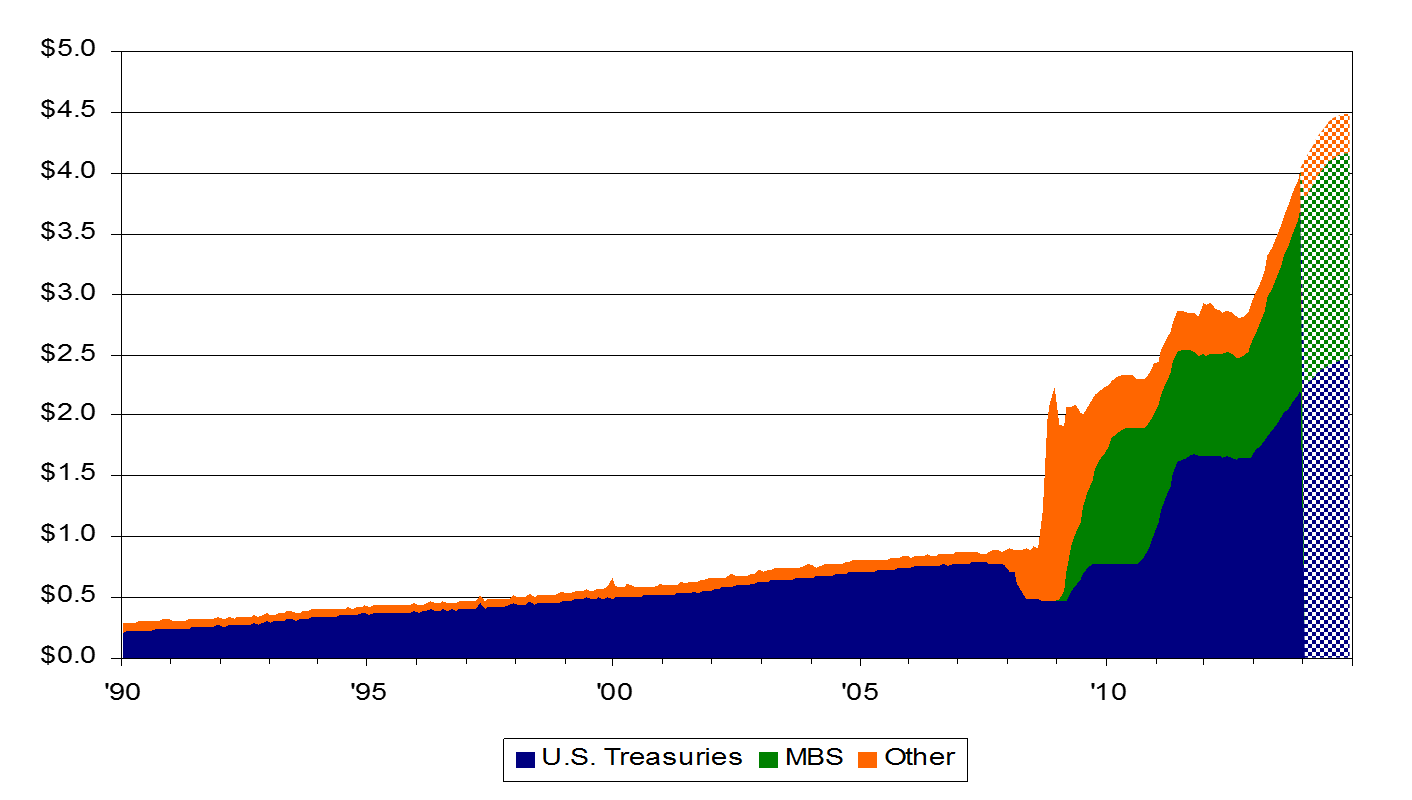 For those with assets in the stock market, QE has dramatically influenced the market since the 2009 financial crisis as seen below in figure 2. At first, QE had a major impact the S&P 500, but recently, the effectiveness of QE on the market has declined. 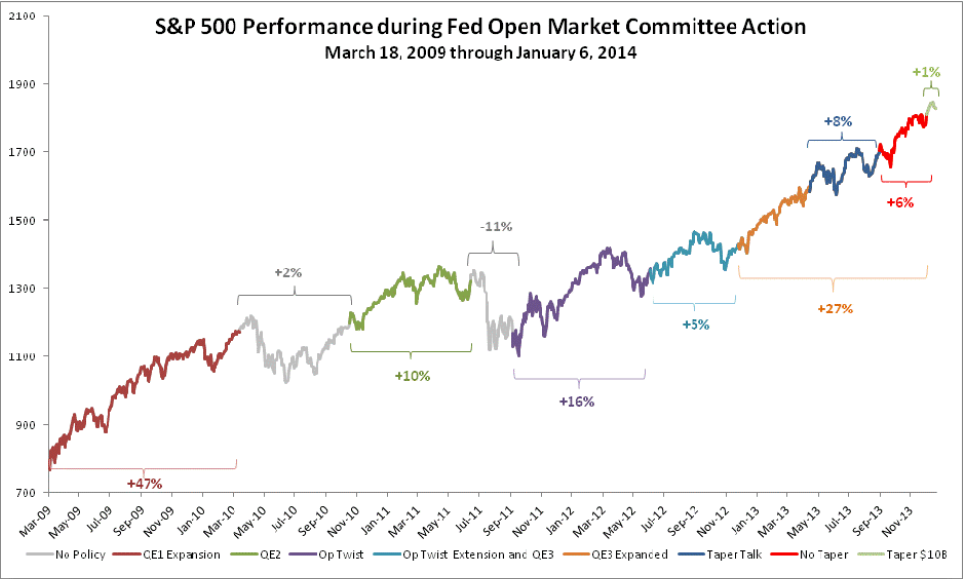 The Fed has signaled that they expect to discontinue “QE” by the end of 2014. Below is a chart from Fannie Mae where they have extrapolated the plan of the Federal Reserve to discontinue their monthly asset purchases. A big question on the mind of many investors is when the Fed stops buying bonds, who will? And what happens if they start becoming net sellers of bonds? Certainly the Fed can hold their bonds, especially their mortgage-backed securities to maturity. However, the buyers of new bonds is less clear, which may lead to higher interest rates over time.

Figure 3: Monthly Asset Purchases by the Federal Reserve* (Billions of $) 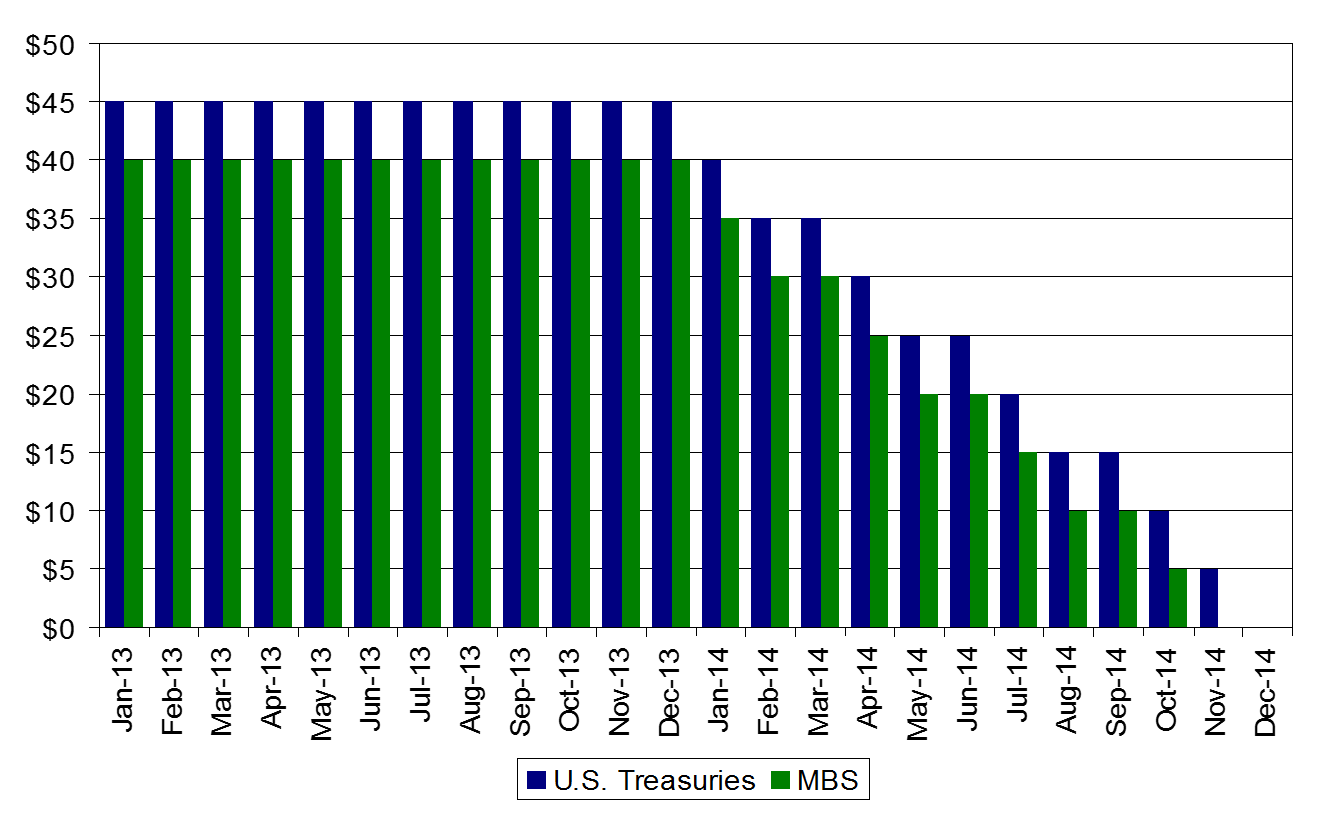 Source: Fannie Mae *Data for 2014 is an extrapolation of plans previously announced by the Federal Reserve

The second way in which the Fed pursues easy monetary policies is by lowering interest rates. These low rates have been a boon for borrowers ranging from governments to businesses and individuals. Research by the McKinsey Global Institute finds lower interest rates have saved governments in the US and Europe $1.6 trillion from 2007 to 2012. Likewise, US and European non-financial corporations have saved an estimated $710 billion. Unfortunately, for those with cash in bank accounts, a low interest rate policy by the Fed has driven short-term deposit and money market rates to zero. It is estimated that households in US and Europe have lost $630 billion in net interest income as a result of low interest rates and QE. 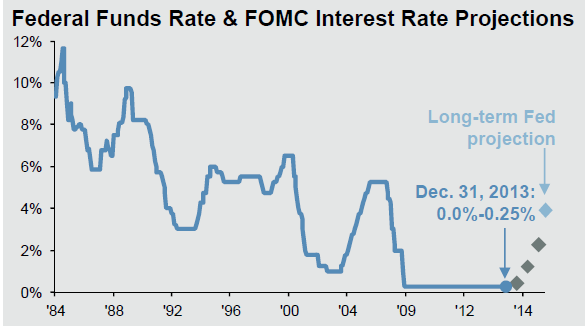 The beginning of Janet Yellen’s term as Fed Chair comes at a pivotal time in the global economy. She has a tremendous challenge ahead as she steers the Fed to remove their accommodative policies without disrupting markets and the economy. Easy monetary policies can’t last forever and the path to normal interest rates from here could be a bumpy ride. Expect increased volatility ahead.